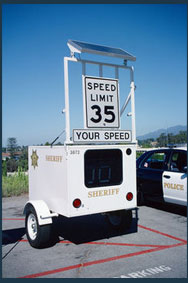 Speeding is by far the most common ticket that people receive. Even a judge in the Orlando area was recently reprimanded for getting too many speeding tickets. Unfortunately, when people get pulled over for speeding it can often lead to other more serious criminal charges such as DUI, Reckless Driving, or Driving While License Suspended, Even if no criminal charges result from the stop, a person is still facing a graduated amount of points (see chart below) and, depending on the speed, significant fines. Just because you got stopped for speeding does not mean that you can't beat the ticket. The police are required to do certain things before they can prove you are guilty of speeding. And when they come to court they must find you guilty of speeding beyond a reasonable doubt.

Click here to check the status of your driver's license.

Mandatory or with attorney

Mandatory or with attorney

In addition to the above, it should be noted that speeding in a Construction zone or School Zone the fines will be doubled.

There are different ways an officer can prove you are speeding in the State of Florida, including pacing, radar, laser, aircraft and even visual estimation. This also means that they can cite you under different statutes. The most common speeding Florida Statutes are 316.183, 316.187 and 316.189. In fact, even though you may not be exceeding the posted speed limit, you could still be cited for driving too fast for the conditions, for example going 70 mph in a 70 mph zone during a heavy thunderstorm could warrant a citation. The officer could even base this on his visual estimate of your speed if it is properly based on their experience. Occasionally, an officer will "cut you a break" by citing you under Florida Statute, 316.074, known as Violation of a Traffic Control Device. The reason is that the speed limit sign is a traffic control device. While it is true that this type of ticket has a lower fine and fewer points, it does not mean that you can't still beat this ticket if you want to fight it.

Of course, officers consider speed measuring devices to be the most accurate and in general they are. However, if they are going to rely on a laser or radar device to stop you they must follow certain procedures pursuant to statute and the Florida Administrative Code. Radar devices can be measured in stationary or moving mode. Florida Highway Patrol and some other agencies have dual antennas so that they can get you coming or going. The units can be handheld or mounted. On the other hand, Laser or LIDAR is always handheld and can only be operated in stationary mode. This is done so that the officer can be more reliable by saying he is focused on one car and not having the radar accidentally pick up a different speeding vehicle. Laser is commonly used in school and construction zones. With both Laser and Radar, the officer must provide documentation that the device is and has been working correctly. If they do not, then this means they have not laid the scientific predicate of reliability of the device and the judge should dismiss the ticket.

Another way officers can cite you for speeding is by pacing your vehicle. Recurrently, many agencies have been using undercover or stealth vehicles so that you don't recognize the officer that is following you and pacing you. Since a speedometer is considered a mechanical speed measuring devices, the officers still need to comply with rules regarding speedometer calibration. The speedometer must have been tested within the last 6 months and the officer must visually estimate your speed and know the distance they have covered. This is just one of the defenses we use to help fight your ticket.

One of the more difficult types of speeding cases is Aircraft tickets. This is when an officer in a fixed wing Cessna circles over the highways and then clocks the vehicles with a stop watch with the white lines that you see painted on the road. He maintains visual contact with the vehicle and then radios an officer on the ground to stop the vehicle. The only mechanical thing the officer has to prove is that the stopwatch is working. However, we have been successful with these tickets because they need both officers to prove the identity of the vehicle and driver.

Regardless of how you were stopped, do not just pay the ticket. The points will stay on your license for 3 years and the ticket will stay on your record forever. Depending on your insurance company it could also result in your insurance costs increasing. Failing to appear at your court date will also result in your license being suspended, referred to as a D-6 suspension. Often we are able to get the ticket dismissed or keep the points off your license, which normally will save your insurance costs from increasing. In addition, unless we discuss that it is necessary, you will not have to attend your court date, because we will attend it for you. Contact us today so that we can combat your traffic violation.